Even a true sporting event. It’s a small war. A concentration of fervour and fury, where representatives from the different districts of Siena battle it out on the magnificent Piazza del Campo. An age-old Sienese event...

Even a true sporting event. It’s a small war. A concentration of fervour and fury, where representatives from the different districts of Siena battle it out on the magnificent Piazza del Campo. An age-old Sienese event... 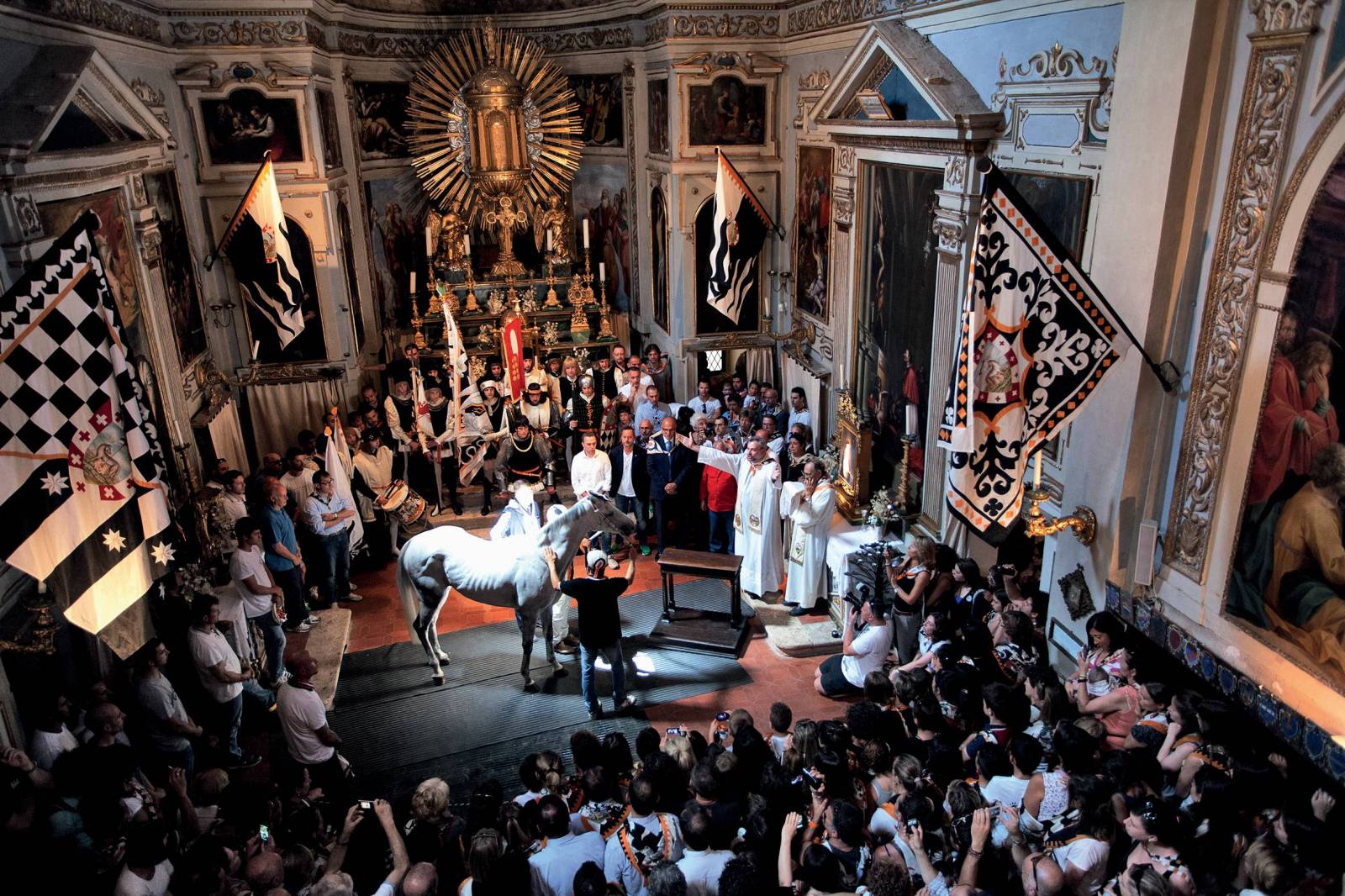 One year of preparation for less than two minutes of racing! That sums up the excessive aspect of the Palio di Siena... The race takes place twice a year: 2 July and 16 August. Ten of the seventeen districts in the city are represented by a jockey and his horse. After six trial runs, the riders compete in a final ultimate test. A fleeting race that lasts only as long as it takes to complete three laps of the track on the scallop shell-shaped Piazza del Campo, Siena’s main square. A cavalcade that is only 1,200 meters long where an entire population holds it breath for a whole year! 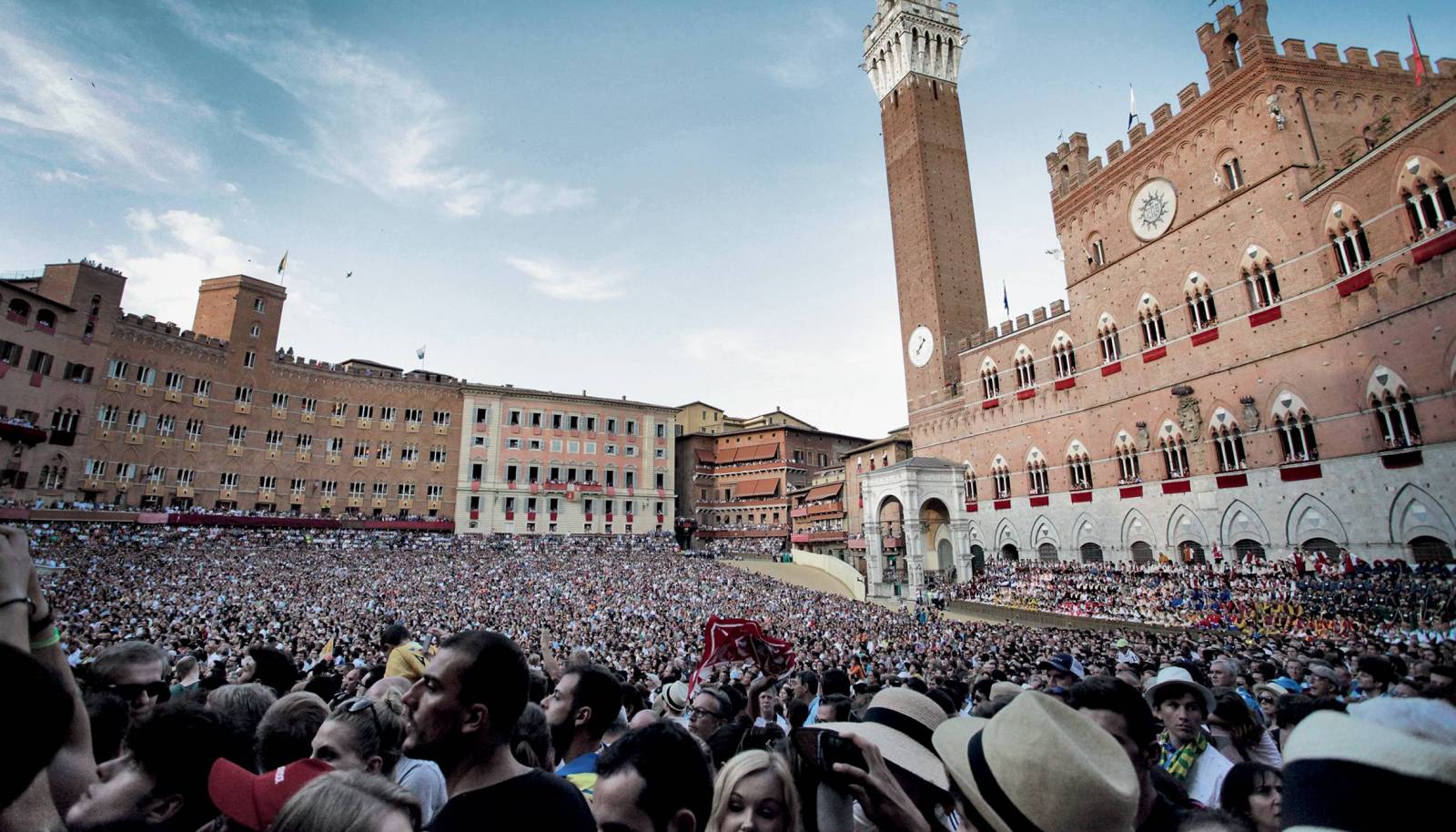 One year of preparation for less than two minutes of racing! That sums up the excessive aspect of the Palio di Siena...

The Sienese have a long memory and like to cultivate traditions. Every effort is made to remember the past, which is evident even on a daily basis since the city has hardly ever changed... The small streets are still medieval in nature. They are a reminder of a time when the city's districts were engaged in internal battles. A time when the big families formed alliances and split apart over the years.

Today, the heart of the city is still divided into 17 contrade (districts), with their own parishes and social organisation. Each one proudly bears its own flag, representing an animal: the goose, eagle, giraffe, snail, elephant, etc. And all of them challenge each other twice a year on horseback, in the city’s main square. 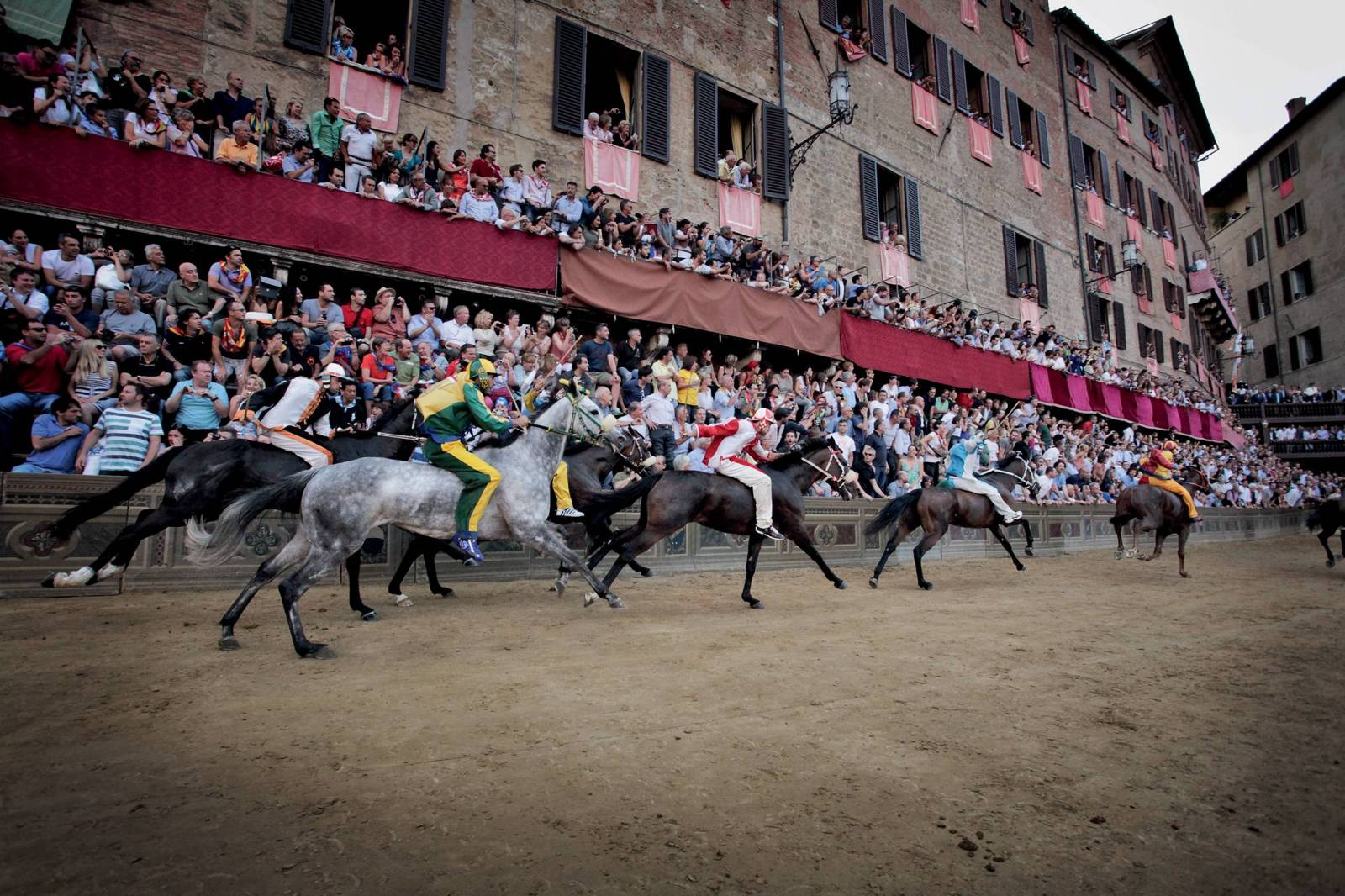 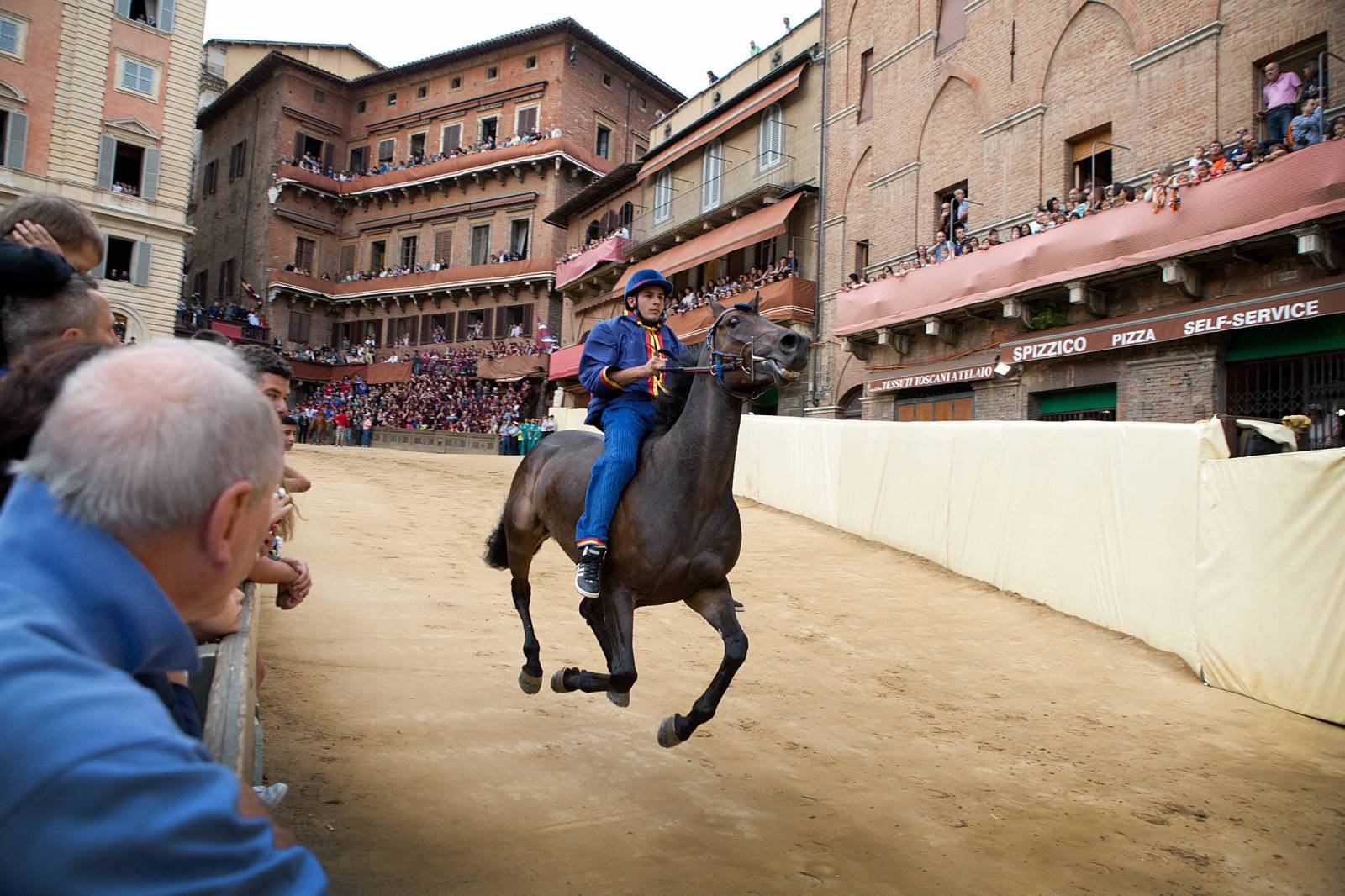 The current version of the Palio is a tradition that dates back to the 17th century. It is an event where fair play has no place. The law of the survival of the fittest still reigns supreme. The stakes are so high that both the winners and the losers are scornful. But the winners are often from the same clan: the most successful contrada is the Goose (Oca), which won the event 63 times, followed by the Snail (Chiocciola) with 51 victories and the Tortoise (Tartuca, 46 victories).

The festivities begin during the week preceding the official race date. The Sienese dress in the colours of their district and attend the banquets and parades organised. The flag-bearers wave their flags over their heads to the beat of the drums and the sound of the trumpets. Meanwhile, behind the scenes, the ten districts that will participate in the first event have been selected (the other seven will have their chance in the second race of the year). The district captains also select the horses. Out of one hundred candidates, only ten make it to the final cut. And when the selection is made, the Mayor of Siena allocates a horse to each district by random draw.

After this lottery, the horses are ridden to their stables, where they are minded and protected by their groom. Some watch over their precious steed day and night. Before the race, each horse is blessed by the parish priest of the district. The most successful horses in Palio history are Folco and Panezio, with 8 wins each, followed by Topolone with 7 wins. 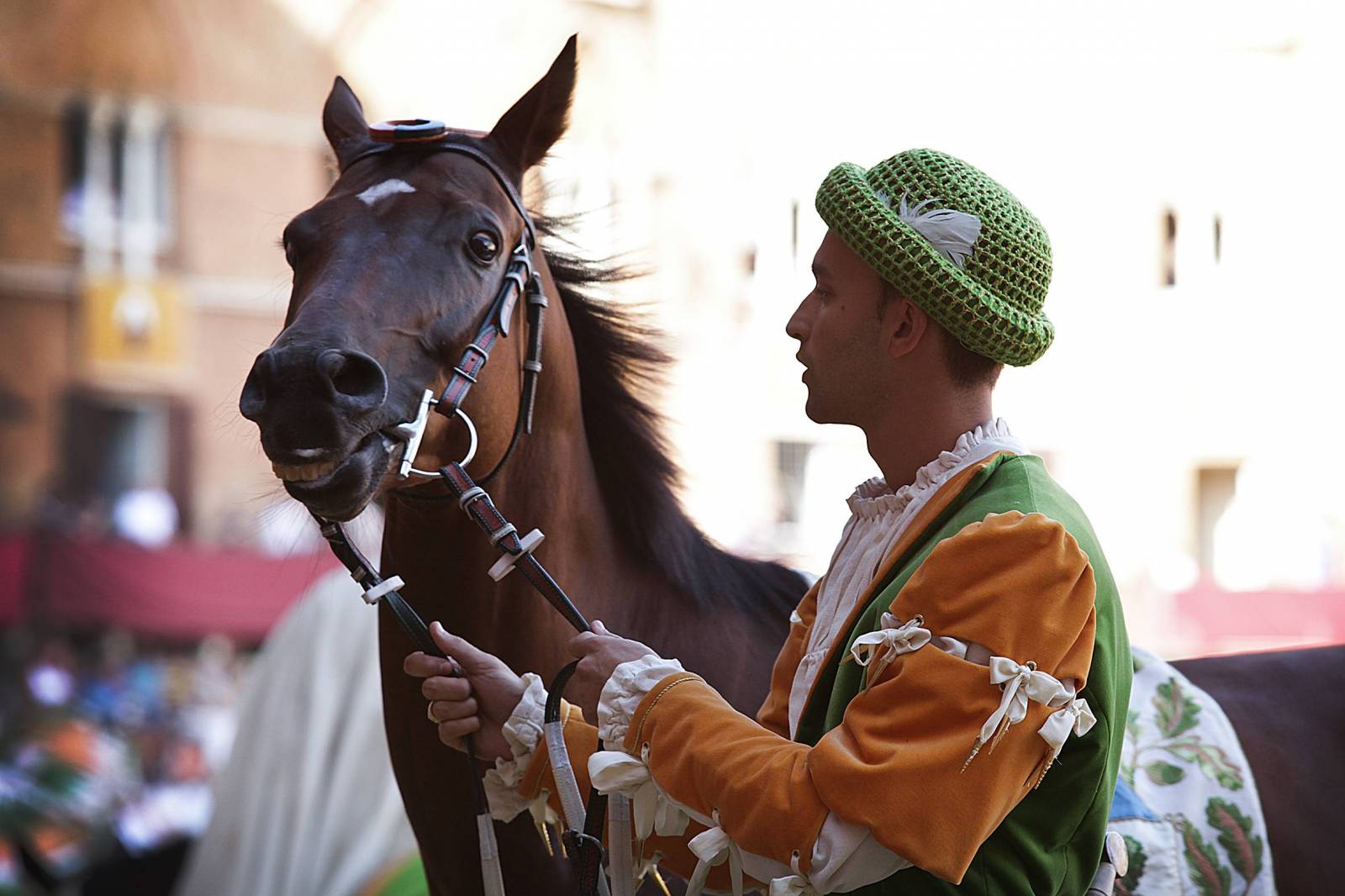 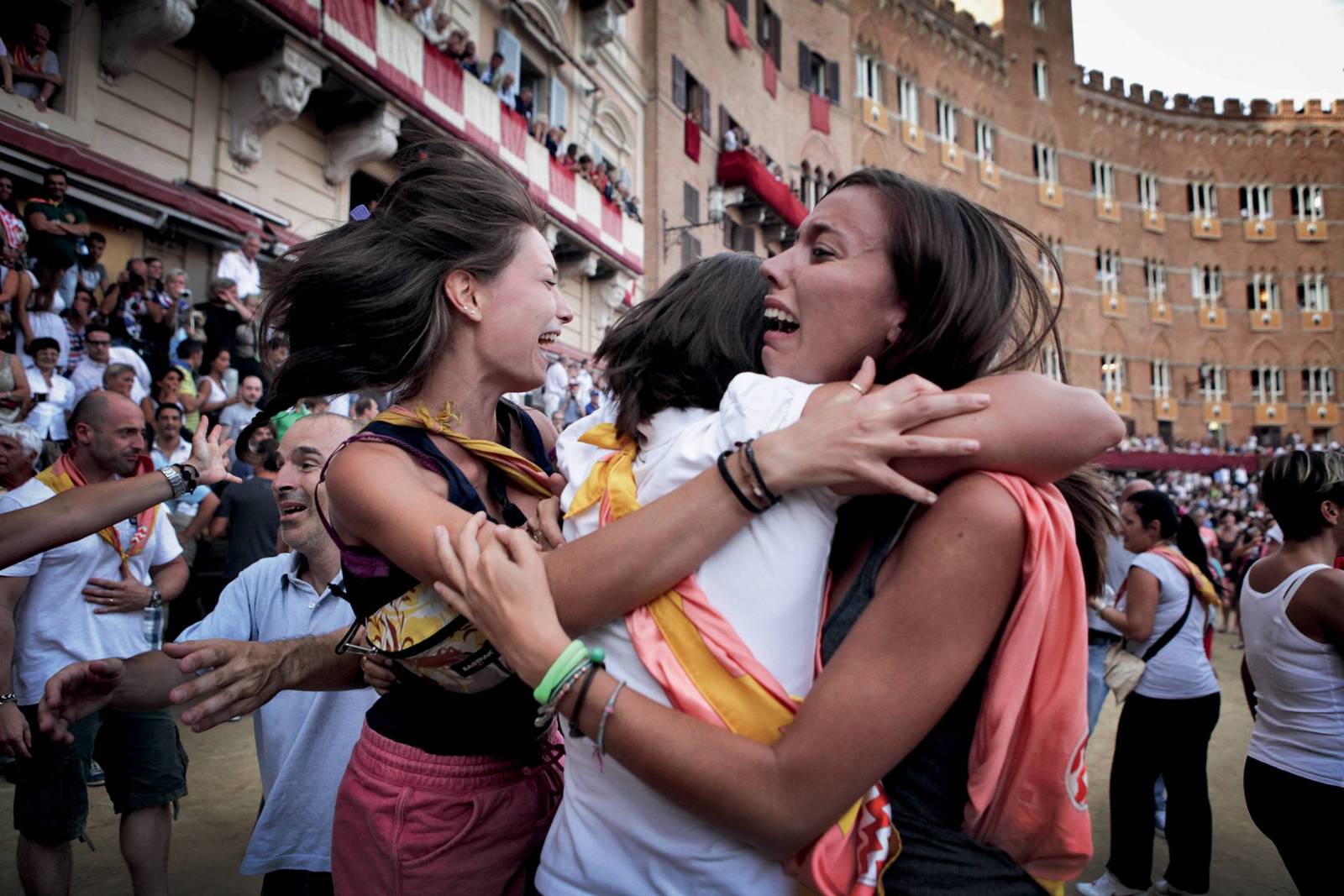 The jockeys (fantini) are also entitled to the priest’s blessing. But the Sienese have a complex relationship with them: these riders are both loved and loathed. They are seen as heroes who can win for their district, but also as mercenaries who can betray them. Many fantini are actually from outside the city. They are paid a lot of money to represent a district and may switch sides from year to year depending on the highest bidder. Today’s ally can therefore become tomorrow’s enemy...

The most successful jockey of the modern era is Andrea De Gortes. Nicknamed Aceto (vinegar), he has won 14 times between 1964 and 1996. But while the jockey is important, it is however the horse that is king. It can win the race by crossing the finish line even without a rider on its back! A comical situation, but one that has occurred more than twenty times in Palio’s history. 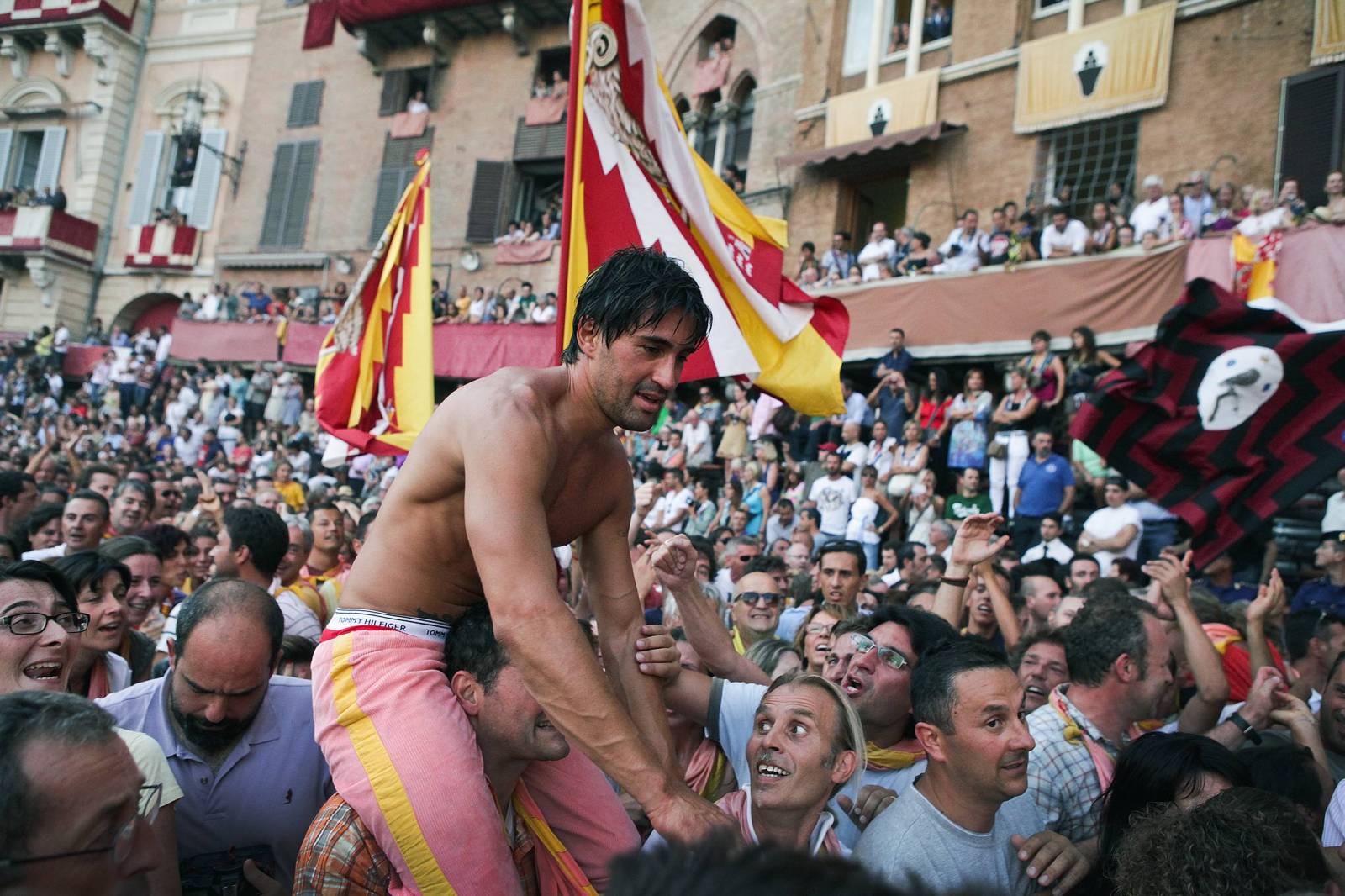 On the starting line, the horses are chomping at the bit. When the rope holding them is released, the ten jockeys and their horses stir up the dust on the circuit. The turns are tight and slippery. The jockeys are steely-faced. They whip their horses but also sometimes their...opponents’ horses. It’s pure chaos. Accidents are not uncommon. The atmosphere is electric. But the pressure is short-lived: the horses complete three short laps and then leave. That's about one and a half minutes of racing!

The winner is glorified; the loser is second in the race, not the last. It's like that: Siena has its rules, which are sometimes quirky. As soon as the race finishes, district representatives are already busy behind the scenes recruiting the best jockeys, who will encounter the priest the following year. Because Palio’s history is far from ending...