Ascot Racecourse officially launched the Longines Tracking System at its Royal Meeting last June. The famous racecourse became the first in the world to be equipped with this system. Longines and Swiss Timing presented in detail how it worked at the last edition of the QIPCO British Champions Day last October, at Ascot Racecourse. H was there.

Ascot Racecourse officially launched the Longines Tracking System at its Royal Meeting last June. The famous racecourse became the first in the world to be equipped with this system. Longines and Swiss Timing presented in detail how it worked at the last edition of the QIPCO British Champions Day last October, at Ascot Racecourse. H was there.

Juan-Carlos Capelli, Vice President and International Marketing Director of the watch brand was evidently proud to present the new Longines Tracking System “which represents a major breakthrough in timing and tracking technology in horse racing.”

As explained by Alain Zobrist, CEO of Swiss Timing - a brand of the Swatch Group that developed this system specifically for Longines - "it allows you to measure at a lower cost and with the utmost precision the position of the horses, the distance between them, their acceleration and deceleration, the distance covered and remaining, and all this in perfect sync with the action since the transmission of data to the scoreboard, for example, takes less than a 1,000th of a second.”

Zobrist is delighted with the collaboration with Longines "which is more like a racetrack partner than a traditional sponsor". 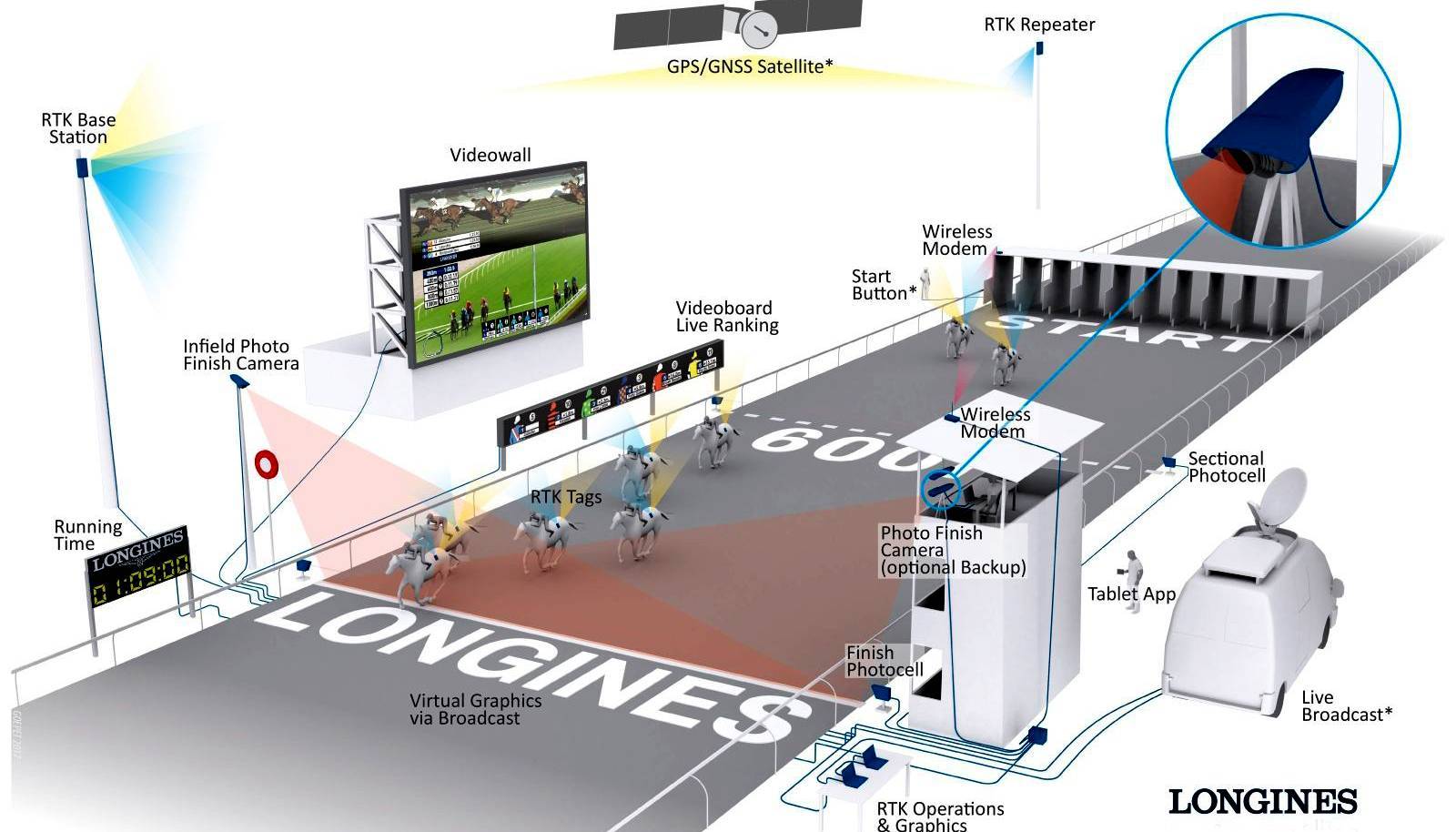 The main advantages of this new system are that it requires no fixed infrastructure, it is highly accurate and it can be linked live with the Longines Photo Finish Camera that takes 10,000 images per second.

Based entirely on receiving satellite data, the Longines Tracking System requires no fixed or permanent infrastructure on the racetrack, as was the case with the previous timing systems. And yet it does not prevent it from measuring up to 16,000 bits of data per second. According to Juan-Carlos Capelli, "For Longines, investing in technological advances is another step in our historic relationship with horse racing. The Longines Tracking System offers this discipline many advantages, in addition to transforming the racing industry. It goes without saying that performance data provided online improves the spectators’ experience and their level of understanding of the sport, which is important to us.” 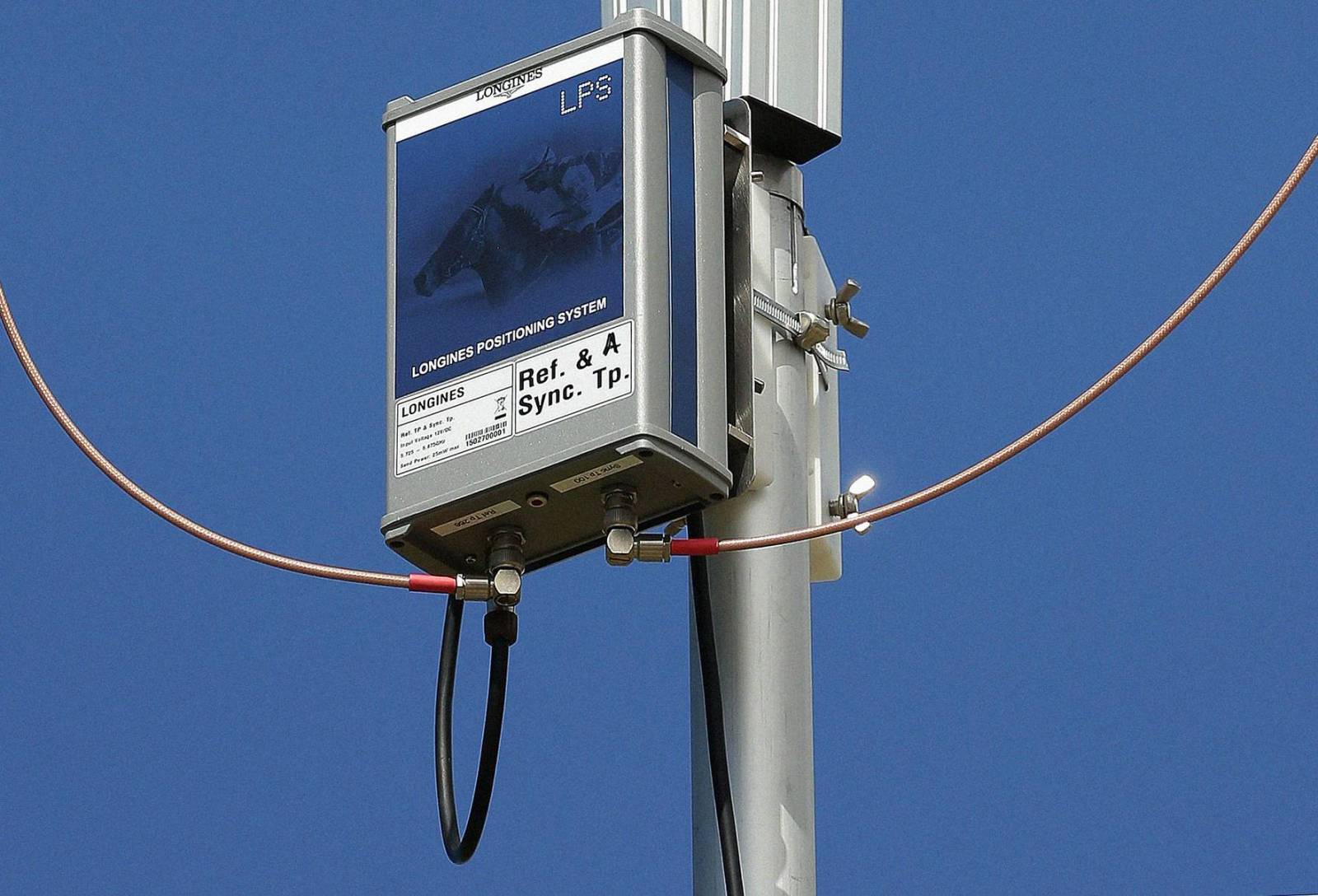 The system’s data, which can be relayed in real time by television, can also be transmitted to the jockeys themselves as well as to the on-site bulletin boards. It provides spectators and punters with valuable information. "But when it comes to betting, we distance ourselves completely," stresses Alain Zobrist. Our data is primarily intended for racing professionals and spectators.”

The Longines Tracking System is based on RTK "real-time kinematic" technology that improves the accuracy of a conventional GPS satellite system. "Where the latter offers precision to within approximately one meter, the new system is accurate to less than 5 cm", according to Juan-Carlos Capelli.

To achieve this, the RTK technology requires the installation on the racetrack of a simple RTK base station (specific reference transmitter) which, after being calibrated, provides a continuous flow of information supplied by mobile transmitters in the horses’ saddle pads. As the technology is based on its own wi-fi network, all the transmitters in the area covered by the RTK base station have their information, acquired by satellite positioning, automatically corrected and retransmitted.

The Longines Tracking System takes several types of measurements. In particular, timing to a 100th of a second for each horse participating in the race, its speed, acceleration or deceleration measured up to 30 times per second; a ranking and average speed of each horse for every phase of the race; the maximum speed and best stretch of the race for each participant; and also the individual distance covered by each horse with a visual of its trajectory.

This new technology will also allow coaches to make comparisons and post-race analyses. It also provides the trajectory of each horse as well as the distance between it and the other contestants.

In the saddle pads

Unlike the Longines Positioning System which already made it possible to understand when and where a horse was winning or losing a race, the Longines Tracking System does not require any fixed installation on the racetrack or any cable. However, racetrack sites are often protected, which complicates the installation of certain infrastructures. With advances in miniaturisation, only two to three mobile antennas (base station and RTK repeaters) communicate with the satellites. The data on the horses is collected by small (the size of a deck of cards) and lightweight (88 g) transponders, called tags, which are placed directly in the horses’ saddle pads. The main advantages of this new system are that it requires no fixed infrastructure, it is highly accurate and it can be linked live with the Longines Photo Finish Camera that takes 10,000 images per second. Longines’ measuring instruments are thus the only ones in the world that integrate race timing and tracking during flat races. Since they have been developed in collaboration with the federation, as well as racetracks, coaches and jockeys, all of whom have different needs, they are automatically approved by all of them.

Longines' passion for equestrian sports goes back more than 140 years. Already in 1878, the Maison had developed a chronograph bearing the engraving of a horse and jockey. Present in racetracks since 1881 and extremely popular among jockeys and horse lovers, this model allowed the user to time performance to the nearest second. Nowadays, Longines is involved in several equestrian disciplines, including show jumping, flat racing, endurance, dressage, driving and eventing.

The Swiss brand has long since chosen to support equestrian sports because, in its opinion, they perfectly illustrate the company's core values, i.e. tradition, elegance and performance. Longines has thus become an institutional partner of the racing world, as evidenced by the major events associated with its name throughout the world, not to mention its partnership with the International Federation of Horseracing Authorities, which has resulted in particular in the Longines & IFHA International Award of Merit, the Longines World's Best Horse Race and Horserace Awards and the Longines World's Best Jockey Award. 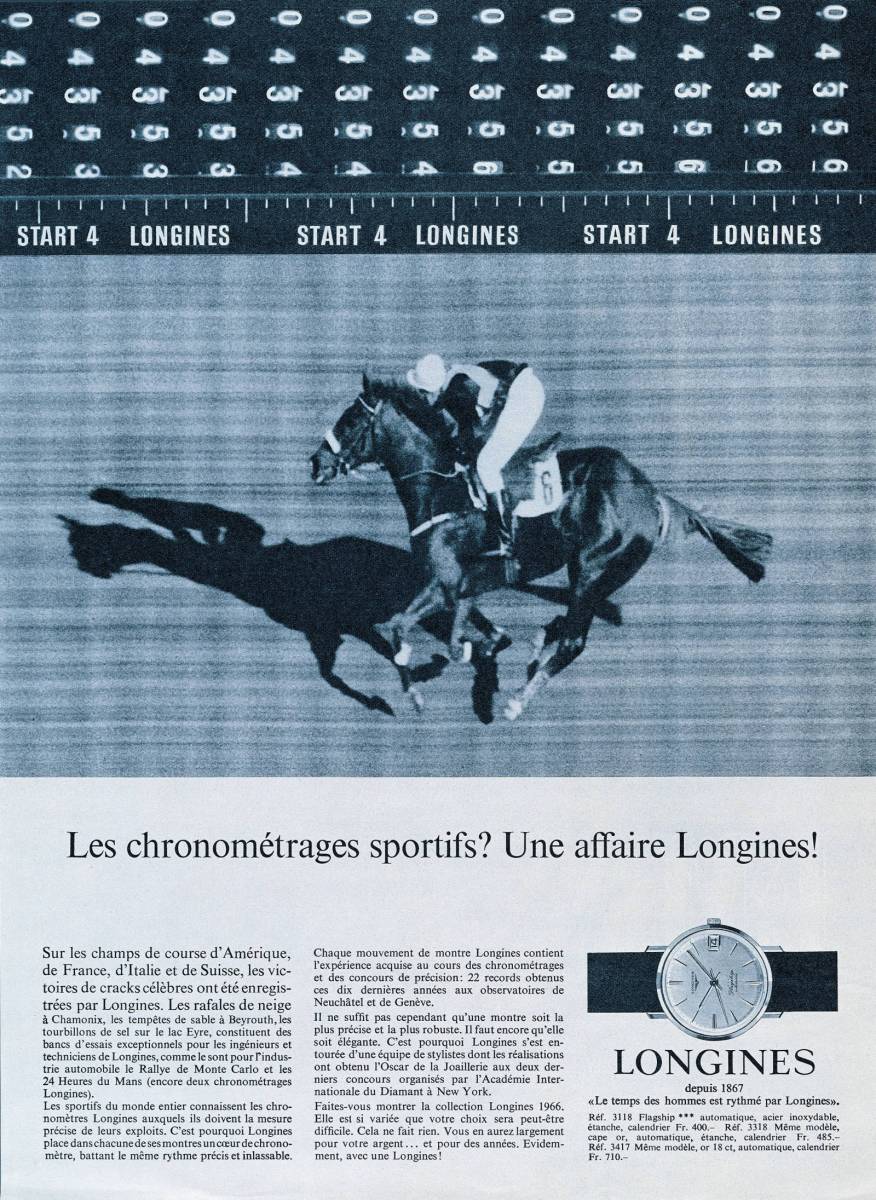 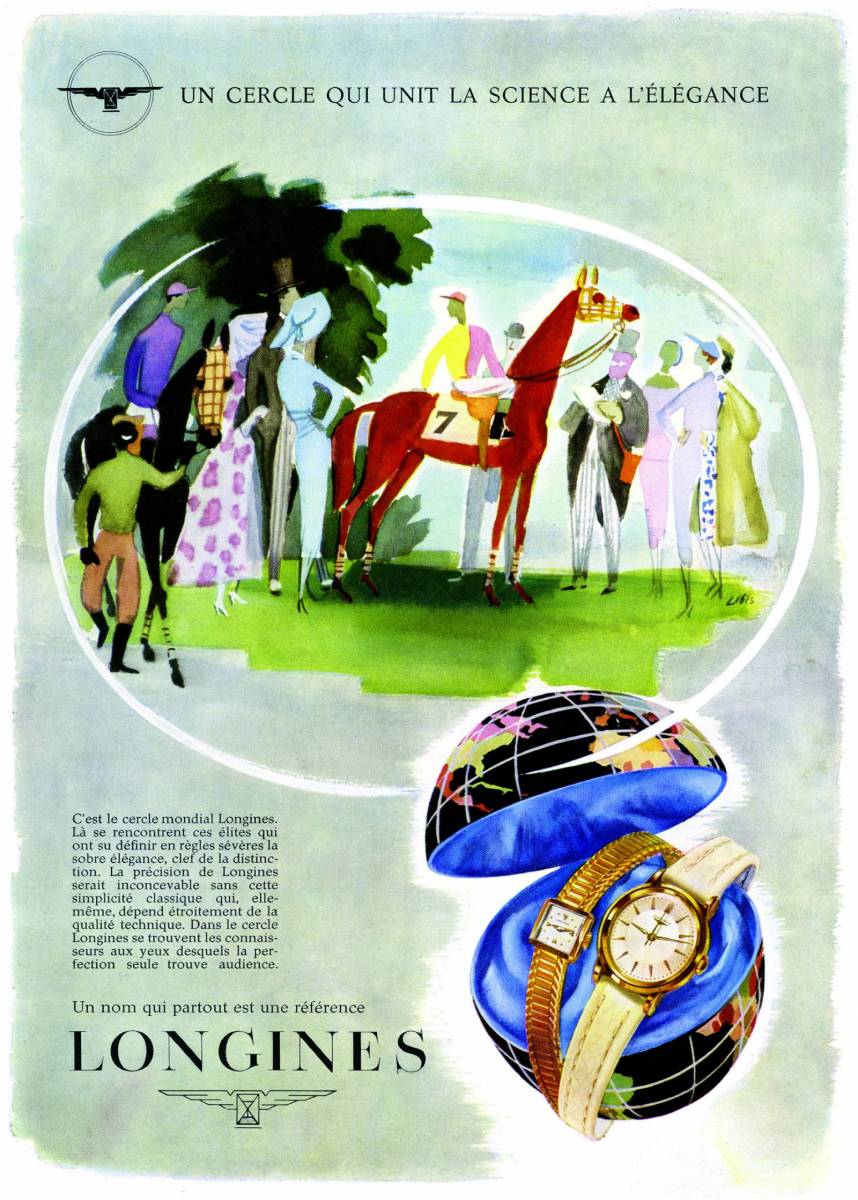